Weathering With You Wiki
Register
Don't have an account?
Sign In
Advertisement
in: Subpage, Stubs, Characters,
and 2 more

View source
watch 01:54
Obi-Wan Finale - The Loop
Do you like this video?
Play Sound

Alive
Hina Amano (天野 陽菜, Amano Hina?) is the female protagonist of Weathering With You. She has an unusual supernatural ability: to manipulate the weather and dive into the sky.

Hina is a teenage girl of average build and height with fair skin and large light blue eyes. She has straight, long blue-black hair, which she ties into two low twin ponytails with black hair ties laid on her shoulders. She has long bangs and two locks of hair framing her face. She usually wears a white-grey hoodie over either a pink sleeveless dress with black lace trim or a pink tank top with blue shorts. Additionally, she wears a blue-stone necklace and carries around a small dark grey canvas backpack. As of the ending of the official MV Grand Escape, she wears a small silver promise ring in the shape of a small wing given by Hodaka on her left ring finger. 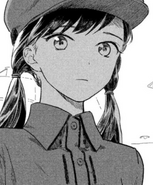 Stub
This article or section is a stub. You can help Weathering With You Wiki by expanding it.

Hina is shown to be a cheerful, sturdy, and strong-willed girl. She is also a kind and caring young woman, as evidenced by her willingness to offer Hodaka a free burger and her newfound love for seeing people happy with her sunshine powers. She is also shown to hold strong familial bonds by taking care of her younger brother, Nagi Amano, after their mother's death, despite her only being 15 and risking much to do so.

Hina was born on August 12th, 2006 to Megumi Amano in Tokyo, Japan. Nothing much is known about her father, but it is likely that he died or divorced Megumi prior to the events of 2020. While her mother was in the hospital due to a fatal illness, Hina went out to a nearby shrine and walked through its Torii gate while prayed for good weather so she can walk with her mother one last time. Suddenly, she found herself transported above the clouds and then wake up at the gate afterward with the powers of atmokinesis. Following this, she went in search of various jobs to support herself and her younger brother Nagi.

Hina meets Hodaka Morishima in the McDonald's that she works at, and approaches him as he sits without ordering anything, offering him a free meal.

Some time later, Hodaka watches as Hina is being intimidated into working at a sketchy club, and attempts to rescue her. He recognizes her as the girl who was kind to him, and they then run away together as the club host pursues them. The host pins Hodaka down, but he manages to shock the man by firing the gun he had found earlier. Not expecting the gun to be real, Hodaka freezes, and Hina quickly pulls him away so that the two can escape to a nearby abandoned building—the same one Hina saw as she sat with her mother. Hina chides Hodaka for interfering, explaining that she needed the job to support herself and her sibling after being fired from her previous job at the fast food restaurant. She criticizes his use of the gun before turning to leave, and Hodaka, also scared by what he'd done, throws it across the floor of the building. Seeing that he'd recognized his mistakes, Hina returns and guesses that Hodaka is a runaway before telling him that she wants to show him something. At the building's rooftop, Hina demonstrates her ability to clear the sky by praying for Hodaka. She introduces herself to an impressed Hodaka as he does the same, boasting to him that she's nearly 18 and thus older than him. They organize a meeting at Hina's house.

Later that day, Hodaka arrives at Hina's house and she cooks lunch for Hodaka as they discuss jobs. Inspired by the idea of the Sunshine Girl, Hodaka proposes that they start a business together; Hina could provide her mysterious ability to people who want clear weather for special events. Their business becomes a great success and they attract a large number of clients ranging from kindergarten students to corporate giants.

The Jingu Gaien fireworks festival is held a few months into the job which Hina is asked to provide a clear sky for. After doing so, she sits on the building's roof with Hodaka, telling him that she's really glad she started her job as they watch the fireworks together.

Hina, Nagi and Hodaka take a job for Fumi Tachibana at her house, clearing the sky for her so that she can light a fire for her deceased husband. Fumi says it's a shame that they're quitting the job, but Hodaka explains that they have no choice since Hina was caught on camera at the festival and thus wants to lay low for a while. Taki Tachibana arrives at Fumi's house and lights a fire for her deceased husband, Fumi encouraging Hina to do the same for her deceased mother when she reveals her passing. Taki and Hodaka discuss Hina as she, her brother and Fumi play in the garden.

On their last job at the park, Keisuke and his daughter Moka Suga are playing together with Nagi as Hina and Hodaka sit and watch them. Hina's last job had been to clear the sky for Moka so she could go outside and play despite her asthma. Keisuke comes over to sit with the two and Hodaka asks him how he knew this was his job and about him having a daughter, but he's ignored as Keisuke instead praises Hina for her abilities. The trio talk for a while until Natsumi arrives, at which time Hodaka exclaims, turns to Keisuke and asks him if he'll be in trouble with her since he has a wife. Keisuke laughs at his misunderstanding and Hina and Natsumi accuse him of being a pervert. Nagi and Moka call Keisuke and Hodaka over to them as the girls discuss the departed men and their similarities. Natsumi asks Hina how she's been, telling her of a dangerous Sunshine Girl rumour a priest informed her of.

It gets dark and the rain begins again so the six depart and split off, Nagi going with the Sugas to a restaurant and Hodaka and Hina walking back to the Amano abode together. As Hodaka walks along behind Hina, he worries over giving her the ring and confessing his love to her, but before he has the chance, Hina interrupts to tell him something. She's cut off as a gust of wind spirits her away, shocking Hodaka as she floats back down to him from the sky. He realizes that she's turning invisible due to the Sunshine Girl's curse. Hina tells him the story of how she became a Sunshine Girl at the rooftop shrine as they walk back to her place, the ring and confession forgotten.

At Hina's apartment, Hodaka hides in the bathroom as the police interrogate Hina about Hodaka's whereabouts. It is revealed that Hodaka's parents filed a missing person report and the police officers are investigating his use and possession of illegal firearms. An officer informs Hina that social services will be called in to take away Nagi, Hina's younger brother, because they are minors with no legal guardian.

Hina decides to run away with Hodaka and Nagi, but the weather worsens even more abnormally as it starts to snow. On the streets, the three are apprehended and Hodaka is caught by two police officers as he attempts to run away but is saved by Hina, who distracts the police by praying for lightning to strike nearby. This then allows the trio to escape to a hotel.

They spend the night at the hotel. As they're about to sleep, Hina confesses to Hodaka that her body is slowly being turned into water, and that she learned from Natsumi about the story of the weather maiden who becomes a living sacrifice; the weather will only return to normal if she disappears permanently into the clouds. He refuses to let this happen and promises to protect her. But the next day, Hina goes missing and the rains have consequently stopped.

Hodaka, having followed Hina to where she was spirited away in the sky, manages to reach the top of the building and jumps through the shrine. He is then transported above the world in the sky and rescues Hina. As they fall to earth, Hodaka begs Hina to start living for herself and the rain resumes with no foreseeable end.

Afterwards, Hina and Nagi were presumably adopted by the Sugas and continued to live in their apartment with Hina resuming her education.

Three years later, Hodaka visits Tokyo to search for Hina and finds her praying in the same spot he first tried to confess to her at. He calls out to her and she's both shocked and happy to see him. The film ends with them embracing each other once more.

As a Sunshine Girl, Hina possesses a unique and wonderful ability that grants her the power to stop the rain and clear the sky by praying. While using this ability, she can manipulate the weather and dive into the sky.

However, as in the folklore described by the priest, there is a consequence of using this ability: the more Hina uses it, the more transparent her body becomes until one day when she finally drains all of the power in her body, she will disappear into the sky.

Her emotions can also depend on controlling the weather. Examples are shown such as the unique determination of saving Hodaka from the police with the same gesture of praying this time for lightning/thunder to hit a car to buy them time to escape, and lastly when she feels cold snow will fall from the sky.

She seems to be great at making Potato Chip Fried-Rice and Ramen with the right techniques and ingredients which seems to make her a very creative and skilled chef.

Community content is available under CC-BY-SA unless otherwise noted.
Advertisement