Alive
Ame (雨, Ame?), or Rain in the English dub, is a minor character in Weathering With You. He's a stray kitten that is adopted by Hodaka Morishima later Keisuke Suga.

Ame is a slender black and white cat with shabby fur and round green eyes. After Hodaka adopted him, he was given a red collar with a gold bell to wear around his neck. 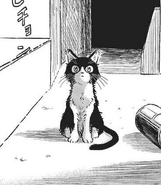 Ame's personality isn't explored much, but he seems to be a reasonably laid-back cat who's loyal to those who took him in.

One night, while Hodaka's taking shelter in the doorway of a lift lobby, Ame walks up to him. Hodaka Morishima feeds him, recognizing that the two are in similar situations.

A little later, after Hodaka's employment, he meets Ame in an alley and feeds him once again. He ends up taking the stray cat in, then naming him Ame, and he resides in K&A from then on. When Hodaka talks to Natsumi Suga about the meeting he'd organized with Hina Amano, Natsumi accuses him of going on a date, which Hodaka protests to to both Ame and Natsumi. Ame eyes him and then goes back to sleep. One day, when Keisuke Suga's on the phone in his office, the man pulls out a cigarette but doesn't end up lighting it as Ame jumps up onto the desk in front of him, once again staring at his owner.

Much later, after Keisuke has kicked Hodaka out, Natsumi picks up Ame and tells Keisuke that the cat thinks he's uncool.

Keisuke ended up keeping Ame after Hodaka moved away, and the cat became obese during the boy's 3 years of absence. When Hodaka visits Keisuke again, Keisuke tells him to go and see Hina Amano, and Ame meows in agreement.

Retrieved from "https://weatheringwithyou.fandom.com/wiki/Ame?oldid=3278"
Community content is available under CC-BY-SA unless otherwise noted.